Explanation of the Traffic Summons

You have been issued a NY traffic summons. Now what?

You’re driving along, going with the flow of traffic and listening to your music when all of a sudden it happens – multi colored lights flood your car. A siren wails. You are being pulled over. The rest of the experience is like a blur. All you remember is “license and registration…do you know why I stopped you…do you know what the speed limit is…do you know how fast you were going…” The cop leaves and comes back a short time later. He returns to you your license and a summons. You faintly recall what he said. Something about a “return date” and that you could enter a “plea.” You are left with a piece of paper (or two, or three) and when you finally sit down to read it it’s so confusing it may as well be written in a foreign language.

If this is how you feel calm down. This page is designed to explain to you step by step what your ticket means and what you have to do to answer it so, at a minimum, you do not end up with a license suspension.

If you have been given a ticket odds are it was a new, computer generated one. Even if it were an older handwritten ticket the content is EXACTLY the same. The only difference is that what is printed in the right column of the computer ticket is printed on the rear of the hand written ticket. If you were given a ticket outside of the City of New York, Rochester, or Buffalo, it looks like this: 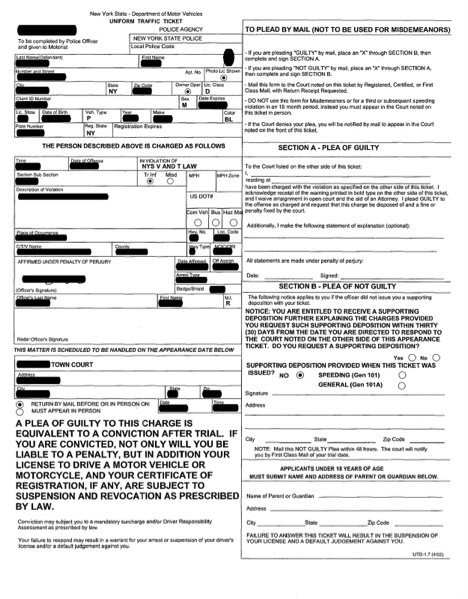 In addition, you may have also been issued a document that looks like the one below. This is called a “supporting deposition” and, for purposes of understanding your ticket and the charges it is not relevant. However, do not discard it and give it to the lawyer that you retain, because a lawyer can use it to prepare for trial or as leverage to have a case dismissed. 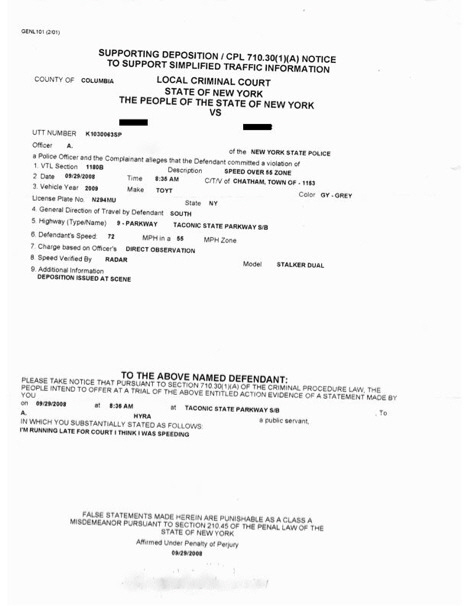 If you were given a ticket in the City of New York, Buffalo, or Rochester it likely looks like this: 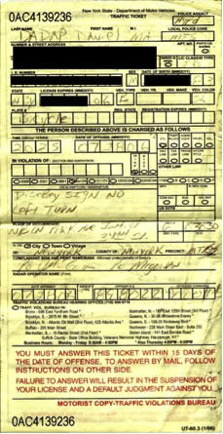 Also note that a computer generated ticket can be written in the City of New York, Rochester, or Buffalo, and that a hand written ticket can be written outside of those places. Other then slight differences in language between the tickets as it pertains to the method for mailing the ticket in with a plea, the content of these 2 tickets are identical.

These are the ONLY TWO TICKETS NY State Police Agencies use for vehicle and traffic violations. IF YOU WERE GIVEN A TICKET THAT DOES NOT LOOK LIKE EITHER OF THESE TICKETS, IT IS NOT A TRAFFIC TICKET! Nonetheless, our office can still help you, and it would be best if you faxed both the front and back of the ticket to us at 914-777-2999 for further assistance and a free phone consultation. .

Parts of a NY traffic ticket

A traffic ticket in New York is formally known as a Uniformed Traffic Ticket, or “UTT.” It can be used to charge a motorist with a traffic infraction, traffic misdemeanor such as reckless driving or DWI, or a traffic felony such as DWI. The following is a breakdown of the sections of the ticket with corresponding explanations.

Upper left of ticket – identification of the motorist / defendant 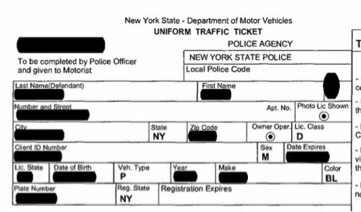 The upper left of the ticket simply describes you, your address, driver’s license state and identification number, and the year, make, model and plate number of the vehicle you were operating.

Middle left of the ticket – charges, date, time and location of the stop

This section of the ticket identifies what you have been charged with (i.e., “speeding” or some other violation).The upper most row contains the date and time of the stop, along with the name of the NY State Law that is alleged to have been violated (it will be either the “V and T Law” or the Transportation Law, noted on the ticket as “Trans. Law”).

Under the upper row of boxes is the section of the law that was alleged to have been broken. In this example it’s “1180D.” To the right of that row is a check box for either a traffic infraction (“Tr. Inf”), or a traffic misdemeanor (“Misd”), or a felony. Also along that row are boxes for, if a speeding charge, the rate of sped alleged and the speed limit on the roadway. Below that is an area where the arresting officer can write in descriptive notes as well as complete information about a truck if the vehicle stopped was a commercial vehicle.

Bottom left of the ticket – the most important section to understand 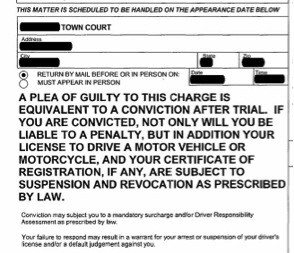 The bottom left of the ticket contains the absolutely most essential information you need in order to timely answer this summons so that your license does not get suspended. This section tells you the full name and address of the court and the return date. Depending on which box is checked off, you (or your attorney) will either have to appear in person on the appointed date and time, or mail the ticket in with a “Not Guilty” plea by the deadline date and time.

A lot of bad things happen when you do not timely enter your plea by mail or appear in court on the appointed date. Some courts send out a warning letter but many immediately suspend your license. In the event that the charge was a misdemeanor of felony a warrant is also issued for your arrest. Many courts also make you post a bond to get new date. If you have blown a plea date our office can often have the suspension lifted, bond waived, and warrant recalled without the need for you to go to court.

This section also explains to you, in all capital letters that pleading guilty by mail is the same as being found guilty after a full trial. What it is explaining is that it makes no sense to plead guilty “as charged” and your case can only get better if you plead “Not Guilty” and fight the charges. It also explains that a plea of guilty may trigger a suspension, revocation from the DMV as well as an additional fine i.e., the driver responsibility assessment). These eventualities are in no way preventable or controllable by the court and trigger under the administrative regulations of the NYS DMV. 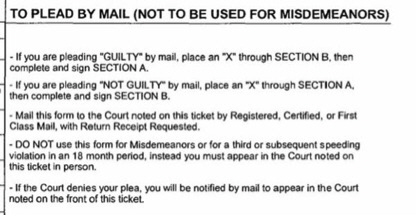 This section tells you how to enter a plea by mail, and warns against pleading guilty to a 3rd speeding ticket, as that will cause a license revocation.

However, for tickets written in NYC, Rochester, and Buffalo the instructions indicate that they go to a centralized infraction bureau at the NYC DMV for entry of a plea. The address is: Traffic Violations Plea Unit, P.O. Box 2950-ESP, Albany, NY 12220-0950.

Middle right of the ticket – plea of guilty 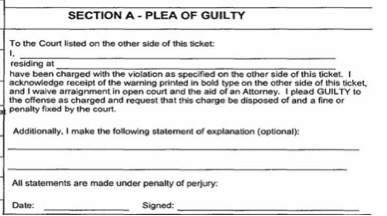 Our office highly recommends that you do not plead guilty “as charged” without availing yourself to a free phone consultation from us. In addition, if you do plead guilty “as charged” save your ink and don’t bother writing any statement of explanation. It matters not what your excuse is. Pleading guilty as charged triggers the entirety of the punitive regulatory scheme against you.

Bottom right of ticket – plea of “Not Guilty” 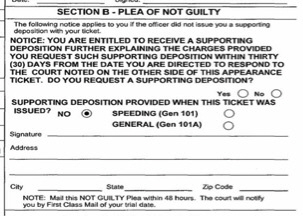 Our law office offers convenience, ease, and certitude of a positive outcome. We will represent you in any court in the State of New York. we get your court appearance waived so you do not have to take time off. We give you piece of mind by giving you a money back guarantee.