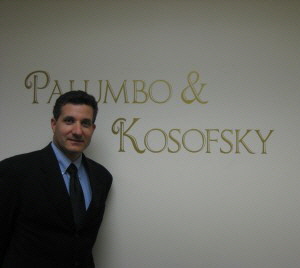 Mark Kosofsky has been an attorney since 1989. Mr. Kosofsky earned his undergraduate degree in Business Administration from Washington University in St. Louis, and his Juris Doctor law degree from Brooklyn Law School. In addition to Brooklyn Law School, Mr. Kosofsky spent a semester at Southwestern Law School and trained in trial advocacy under the esteemed criminal law and trial advocacy Professor Norman Garland. Mr. Kosofsky is licensed to practice law in New York, Florida, Connecticut, and the District of Columbia.

Before joining Palumbo & Associates, P.C., Mr. Kosofsky has proven himself as a trial attorney, having been in house Senior Trial Counsel for a fortune 500 company. In that capacity he protected the rights and economic interests of those accused of traffic crimes and infractions which caused injuries to other people. As Mr. Kosofsky came to learn, just because you stand accused does not mean you committed the act.

After many years as in house trial counsel, Mr. Kosofsky joined Palumbo & Associates, P.C. in 2008. He did this to shift his focus from primarily civil defense to criminal defense. Little did Mr. Kosofsky know that he would become the center of his own case, when he innocently parked his car at a park in Great Neck Estates in 2012 and was unconstitutionally charged with trespassing. Mr. Kosofsky was outraged that he was facing a fine of $1,500.00 and 15 days in for using a park open to the public, and that he was not even personally cited but that an appearance ticket charging trespassing was left on his vehicle windshield. What’s more, Mr. Kosofsky was in the park to use a public tennis facility of which he was an authorized paying user.

Mr. Kosofsky, along with the law firm of Palumbo & Associates, P.C., drew a battle line in the sand in the Great Neck Estates Village Court. This issue was not parking enforcement, but an all out assault on a person’s 1st, 4th, 5th, and 14th amendment’s rights to due process, to be id entified as a defen dant, and to use a public park. A motion was brought to dismiss the charges. The Village prosecutor, knowing he was outgunned, did not even advocate on behalf of his client the Village of Great Neck Estates. Rather, he joined Mr. Kosofsky’s motion, asking the court to dismiss the case in the interests of justice. This left the Village Court no choice but to dismiss the matter. As Mr. Kosofsky was later quoted in Long Island Newsday on October 3, 2012:

“They know legally they're wrong and they want to get rid of me because I'm
rattling the cage. It just surprised me they didn't do it at the beginning."

When you put the law firm of Palumbo & Associates, P.C. on your side, this is the caliber of counsel that you get – a lawyer unafraid to state down the barrel of a gun on your behalf. A lawyer that takes speeding and traffic tickets as seriously as you do. A lawyer that is passionate about arguing not just for your case, but for your constitutional rights.